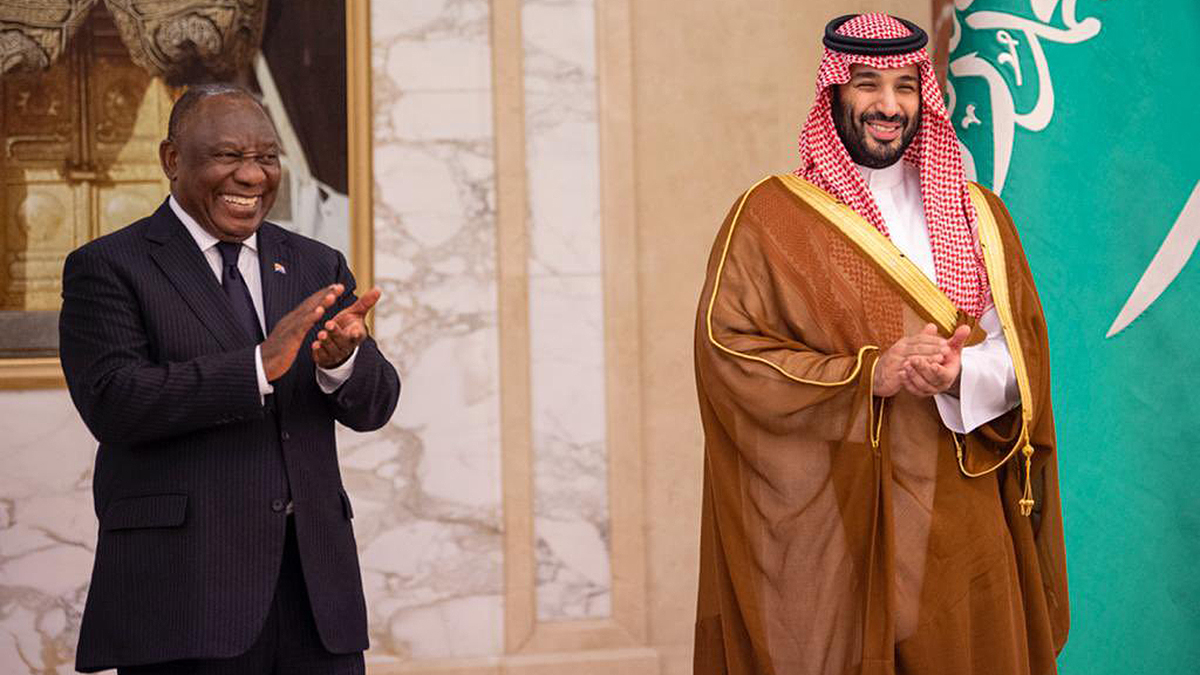 President Cyril Ramaphosa wants South Africa and the Kingdom of Saudi Arabia to forge more ties in the tech space.

The President made the proclamations during the closing session of the Saudi Arabia-South Africa Investment Conference on the occasion of the state visit to the Kingdom of Saudi Arabia.

Ramaphosa visited the kingdom at the invitation of His Royal Highness (HRH) King Salman bin Abdulaziz Al-Saud, and was welcomed in Jeddah by HRH Crown Prince and Prime Minister of the Kingdom of Saudi Arabia Mohammed bin Salman bin Abdulaziz al Saud on October 15 and 16.

The president seeks to strengthen ties in sectors such as mining technologies, ICT and renewable energy, among others.

During the visit, the two countries signed agreements and memorandums of understanding worth around $15 billion (R270 billion).

“Having started in 2018 with Saudi Arabia pledging $10 billion into the South African economy, in many ways the seed has been planted and that seed has germinated and so far, $1 billion has been invested in South Africa through a company called ACWA Power,” Ramaphosa said.

Last year, ACWA announced the start of construction of the Redstone Concentrating Solar Power Plant in the Northern Cape.

At the time, the Saudi Arabia-based company said that with a total investment of R11.6 billion, the Redstone project was the largest renewable energy investment in South Africa to date.

The Redstone plant will be equipped with a 12-hour thermal storage system that will provide clean, reliable electricity to nearly 200,000 homes around the clock.

The start of operations is scheduled for the fourth quarter of 2023.

Ramaphosa added that South Africa can offer expertise in mining services, technologies and a range of equipment and components used in the mining industry.

“There are also many opportunities for joint venture partnerships,” the president said. “South Africa is leading the way on the continent in terms of advanced manufacturing, science and technology that drives the export of our goods and services.

“Our companies can benefit from sharing ideas, technologies and market knowledge in areas as diverse as green hydrogen, petrochemicals and pharmaceuticals. South Africa is a favorable, reliable and stable place to do business.

According to Ramaphosa, South Africa’s service sectors and professional skills are highly valued in the Middle East.

“Our engineers, doctors and teachers have already made their mark here. We also have filmmakers, entertainment entrepreneurs, bankers, insurance companies, tourism companies and information and communication technology companies who are ready to partner with you.

The announcement comes as SA leans towards cleaner energy sources, with some of the coal-fired power stations reaching their end of life.

The South African government believes that switching to renewable energy will be essential to closing the country’s electricity deficit.

Over the years, the country has been plagued by crippling electricity shortages, which has seen electricity utility Eskom implement load shedding which is negatively impacting businesses and households.

This morning, South Africans woke up to news that stage four load shedding had been put in place at 5.30am due to five generators failing at five power stations overnight.

According to Eskom, load shedding will be in place until further notice.

“One area of ​​potential synergies that I particularly want to refer to is the green hydrogen economy,” Ramaphosa added.

“We have all followed with great interest the ambitious and spectacular Neom project on the Red Sea coast.”

Based in Saudi Arabia, the Neom project is the world’s largest commercial-scale hydrogen facility powered entirely by renewable energy.

He pointed out that with plans to source 100% of Neom’s energy from renewable sources, including hydrogen-based energy, Saudi investors will find substantial opportunities to leverage Africa. from the South in this regard.

Likewise, Ramaphosa said, there are opportunities for South African companies to take advantage of Neom.

“We are the world’s largest producer of platinum, a key input in hydrogen fuel cell technology. Our ambitious plans to unlock the potential of the green hydrogen economy include the development of a “Hydrogen Valley” that stretches from the Platinum Belt to the industrial heartland of the country. »

The chairman revealed that a number of multinational investors, such as Anglo-American Platinum, have already started to take advantage of these opportunities.

“Saudi investments across the entire green hydrogen economy value chain will support not only South Africa’s economic objectives, but also those of Saudi Arabia, in its continued drive towards sustainability.”