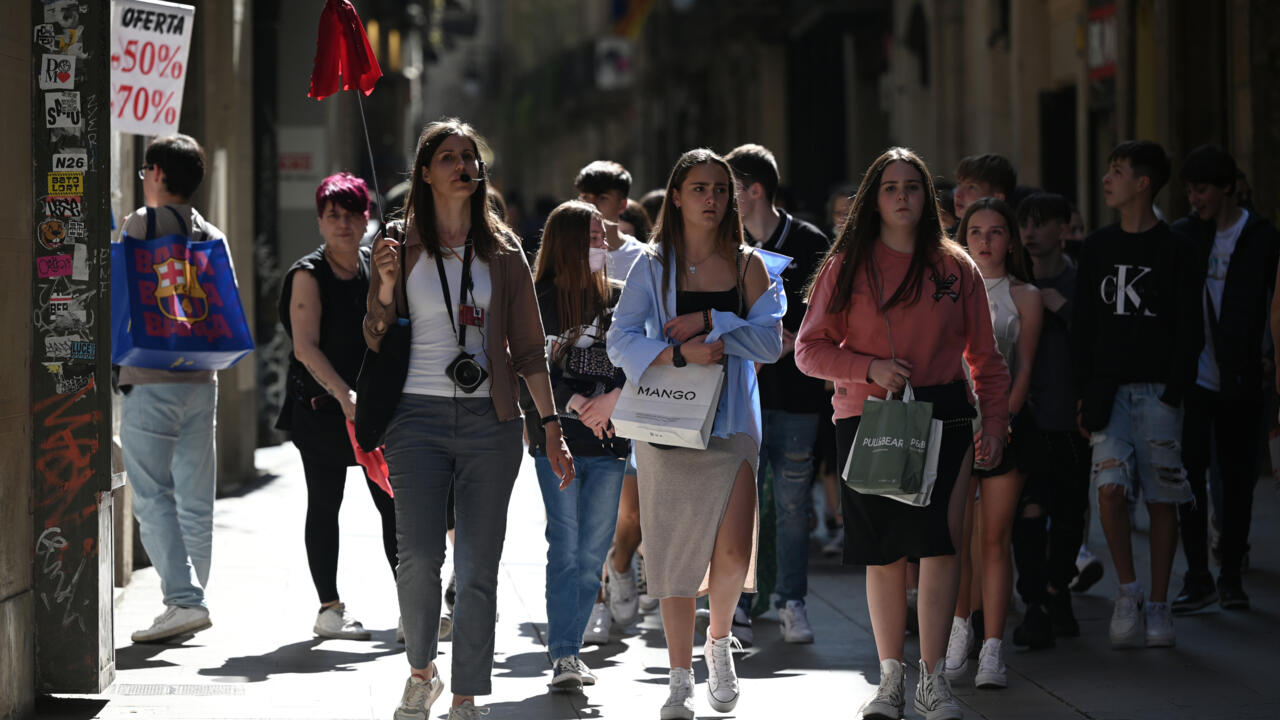 Barcelona (AFP) – Visitors once again jostle through the narrow streets of Barcelona’s Gothic Quarter as global travel rebounds from the pandemic, reigniting tensions around mass tourism in the Spanish port city.

Hotel occupancy in the city rose in April, which included the Easter long weekend, to nearly 85%, close to pre-pandemic levels, according to the Barcelona Hotel Guild.

“It came as a shock after two years of the pandemic,” said Cuso, 32, who had hoped the city would use the pandemic pause to change its tourism model.

Cuso, who grew up in the Gothic Quarter, said he enjoyed the calm in the area, which is normally flooded with tour groups visiting its medieval buildings.

After receiving a record nearly 12 million visitors to its tourist hotels and apartments in 2019, arrivals fell 76.8% in 2020, mirroring declines across Europe.

The pandemic has also shown the dangers of an “economic monoculture based on tourism”, he said.

“The majority of residents who worked in tourism found themselves out of work overnight,” Cuso said.

Tourist arrivals in Barcelona had grown steadily before the pandemic and the tourism sector accounted for around 15% of the economy of Spain’s second city before the health crisis.

The tourism boom has sparked a backlash, with regular protests including one in 2017 where vigilantes slashed the tires of an open-top tour bus and spray-painted its windshields.

Barcelona residents identified tourism as the city’s main problem in a poll conducted that year by the town hall.

“We have to change the model to reconcile the two worlds. We cannot have the city of tourists on one side and the city of locals on the other,” Francesc Munoz, who heads a student observatory, told AFP. urbanization at the Autonomous University of Barcelona. .

With terraces once again full of sangria-drinking tourists, Barcelona’s leftist town hall recently said it was planning new measures to tame the sector.

Access to the busiest places could be restricted, and the circulation of tourist buses more regulated.

Barcelona City Hall has already cracked down on illegal listings on online rental companies like Airbnb and banned tour groups from entering the historic La Boqueria market during peak hours.

“Tourism is an important economic, social and cultural asset for Barcelona,” said Xavier Marce, city councilor in charge of tourism.

“We need to maximize the benefits and control the damage. This is the debate that all European cities are having,” he added.

Marce dismissed the argument that the city has not used the two-year drop in arrivals due to the pandemic to change the city’s tourism model.

“Two years have not been wasted. It is very difficult to solve tourism problems when there is no tourism,” he said.

The tourist guide Eva Marti, 51, says she understands the concerns of the inhabitants, but believes that formulas must be found to maintain an activity which supports many inhabitants.

“In these 13 years of working as a guide, it has become increasingly difficult to show tourists around,” she said in reference to measures such as rules limiting the size of tourist groups to 15. people in certain areas.

“We have to find a balance,” she added on a sunny esplanade in the Gothic Quarter before leading a group of tourists back to their cruise ship in the port of Barcelona.

Cuso, the anti-mass tourism activist, agreed with her.

“We are not asking for zero tourism. There will always be tourism, but we must have a diverse city, where tourism coexists with other types of economic activity,” he said.

Tanzania: We will work closely with the private sector, assures the government IMF