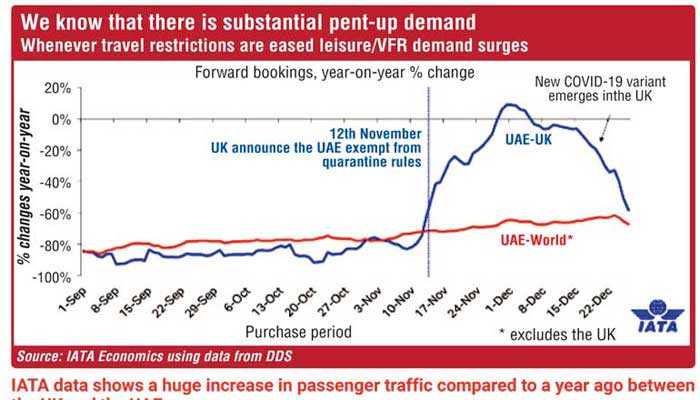 Mass tourism in the midst of a pandemic

The Persian Gulf, known for its scorching summer heat, is at its best during the short winter. December is particularly pleasant, with warm daytime temperatures, cool nights, light winds and calm seas. Perfect holiday weather compared to northern Europe, which is then humid and gloomy. What better time to start reopening Dubai for mass tourism after months of COVID-induced shutdowns than the Christmas holidays?

The UAE is technically one nation, but in some areas the seven individual constituent states have sufficient autonomy to behave differently. Abu Dhabi, home to Etihad Airways and the UAE’s richest sheikhs, has kept COVID restrictions in place. Neighboring Dubai with its huge leisure sector (estimated at 12% of GDP) and the headquarters of Emirates (airline), has decided to open its doors to winter tourism in December 2020.

The United Arab Emirates have been included in the list of countries in Britain’s â€œsafe travel corridorâ€. This meant that travelers from the United Arab Emirates did not need to isolate themselves on their return to the UK. Coupled with the recent normalization of diplomatic relations between the UAE and Israel, an increase in tourism was observed in December 2020.

A welcome relief for the leisure industry

The industry assumed there was a substantial pent-up demand for pleasure travel, suppressed due to pandemic restrictions. The chart based on International Air Transport Association (IATA) data shows a huge increase in passenger traffic, compared to a year ago, between the UK and the UAE. Emirates resumed Airbus A380 flights to London in early December, and by Christmas four of the giant planes were flying between the two countries daily.

Arrivals to Dubai from Israel were even greater. The Abrahamic Accords, normalizing relations between the two nations for the first time in their respective histories, were signed in September 2020. Subsequently, when regular flights began connecting the two countries, an estimated 5,000 Israeli visitors entered the United Arab Emirates in November. This number increased tenfold to exceed 50,000 in December. Dubai hotel menus must now include kosher selections (food prepared according to Jewish dietary rules), and signs in Hebrew are visible throughout the city.

The virus fights back

However, as evidenced by the sharp drop in bookings that followed, the pandemic had the last laugh. As new variants of COVID-19 emerged, particularly a strain that originated in the UK, infections in Dubai started to skyrocket again within weeks. In response to the surge in transmission, the UK has reimposed the quarantine for travelers arriving from Dubai in mid-January.

Dubai has seen a tripling of its daily COVID cases from the end of December. The restrictions have been reimposed, including full lockdowns, and are not expected to be relaxed for months. The UAE government has implemented a nationwide vaccine rollout to bring the virus back under control.

Extensive immunization experience across the country

The United Arab Emirates and Israel have both attempted to vaccinate their entire country in an attempt to gain “herd immunity.” This is defined as “the immunity or resistance to a specific infectious disease in a population which results from the fact that a majority of that population has been exposed to that infection, for example by having been vaccinated against it or having previously been vaccinated against it. infected with it â€.

The United Arab Emirates has a population of around 10 million and Israel 8.6 million. Both countries are trying to vaccinate as many residents as possible, with around 75-85% accepted as sufficient, in order to achieve herd immunity without delay.

The Israeli approach is to use one type of vaccine, the Pfizer / BioNTech product. This effectively means that the whole country has become a gigantic clinical test bed and trial for the effectiveness of this vaccine. Already 4.6 million people (50.4% of the population) have received a first dose, with 50,000 vaccinations per day.

The United Arab Emirates conducted the first clinical trials of the Chinese-made Sinopharm vaccine and was the first country to certify it. This was the main one used, with over 5.6 million people receiving their initial dose. The Pfizer vaccine, available only in limited quantities, is reserved for frontline healthcare workers and those with pre-existing health conditions.

The two countries plan to vaccinate anyone who wishes to receive the vaccine by the end of March 2021, becoming the first two countries in the world to do so. The progression of the disease once this step is taken will be of primary interest to the travel and leisure industry. The UAE’s â€œmegaâ€ airlines, which have grounded large numbers of planes and laid off many employees, will want to resume passenger flights as soon as possible.

Some sort of vaccination certificate, or “immunity passport,” for those who have recovered from the disease, may be a requirement for international travel. However, the World Health Organization (WHO) advised against such a decision due to “… uncertainty as to the actual existence of long-term immunity … for COVID-19”. Whether travelers who have been immunized can still be a vector of transmission is another of the many unknowns in this pandemic.

Therefore, while the need to achieve collective immunity will be an urgent need for all countries that depend on inbound tourism, many questions remain unanswered. Opening borders before protecting its people can be a dangerous step, as Dubai has witnessed the hard way during the winter travel season.

No Croatian mass tourism in 2021, although some destinations will thrive