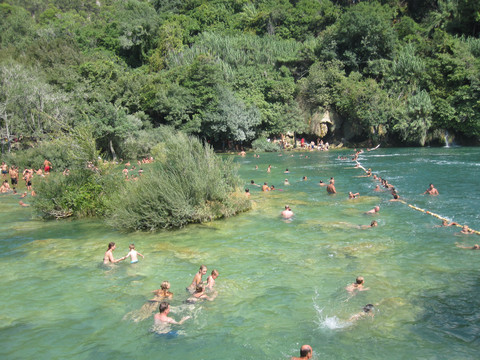 Some 30 percent of the world’s tourists go on vacation in and around the Mediterranean Sea.

In absolute numbers, that’s over 300 million people every year. And this number is even expected to reach 500 million by 2030.

The number one tourist destination is France – followed by Spain, Italy, Turkey, Greece, Egypt and Morocco.

Half of tourism in the Mediterranean is coastal tourism, which accounts for up to 11.3 percent of regional GDP.

This means that tourism is a huge source of income and employment in each of the coastal countries of Europe, North Africa and the Middle East.

However, mass tourism also has a serious drawback for the Mediterranean coast: it destroys land and sea ecosystems.

It also often excludes the local economy and puts pressure on local communities.

Turning a city or area into a sustainable ecotourism site is also risky, as one or more bad decisions can lead to lost income.

This is the reason why several communities have decided to work together within the framework of Inttereg MED cooperation, an initiative financed mainly by European Union cohesion funds.

The aim is to exchange best practices and learn from successes and failures.

Interreg MED is a network of 900 national, regional and private partners. On the European side alone, it represents 57 regions, in 13 countries.

The difference between EU policy and EU regional policy is that the latter is based on voluntary project-based participation.

When the European Commission draws up legislation which, when supported by the European Parliament, must be implemented by the Member States, transnational organizations draw up handbooks.

The handbook on sustainable tourism for example helps local authorities to move their community from mass tourism to eco tourism, without losing (a lot) of income.

One example is the transformation of protected areas into sustainable tourism zones. Several areas in the Mediterranean have been selected for cooperation.

One of them is the Wadi Rum region in Jordan, made famous by the film Laurence of Arabia and has had to deal with mass tourism which has gradually destroyed the site.

Learning from other communities with protected areas in the Mediterranean, tourism in Wadi Rum is now managed by the local Bedouin community, with a clear interest in keeping the desert intact.

The result of this sustainable tourism is not only that nature has been preserved, but it has helped attract more value-seeking tourists, who, by spending a little more, have also increased the income and employment of the region. local community.

Although Jordan is not and probably never will be part of the European Union, it serves as an example of how European cooperation can improve the European neighborhood and how it can in turn serve as a model for European communities.

Or as Tatiana Fernandez, responsible for the economic promotion zone of Catalonia, said at the last Interreg MED conference: â€œWhen we work together, the results are betterâ€.