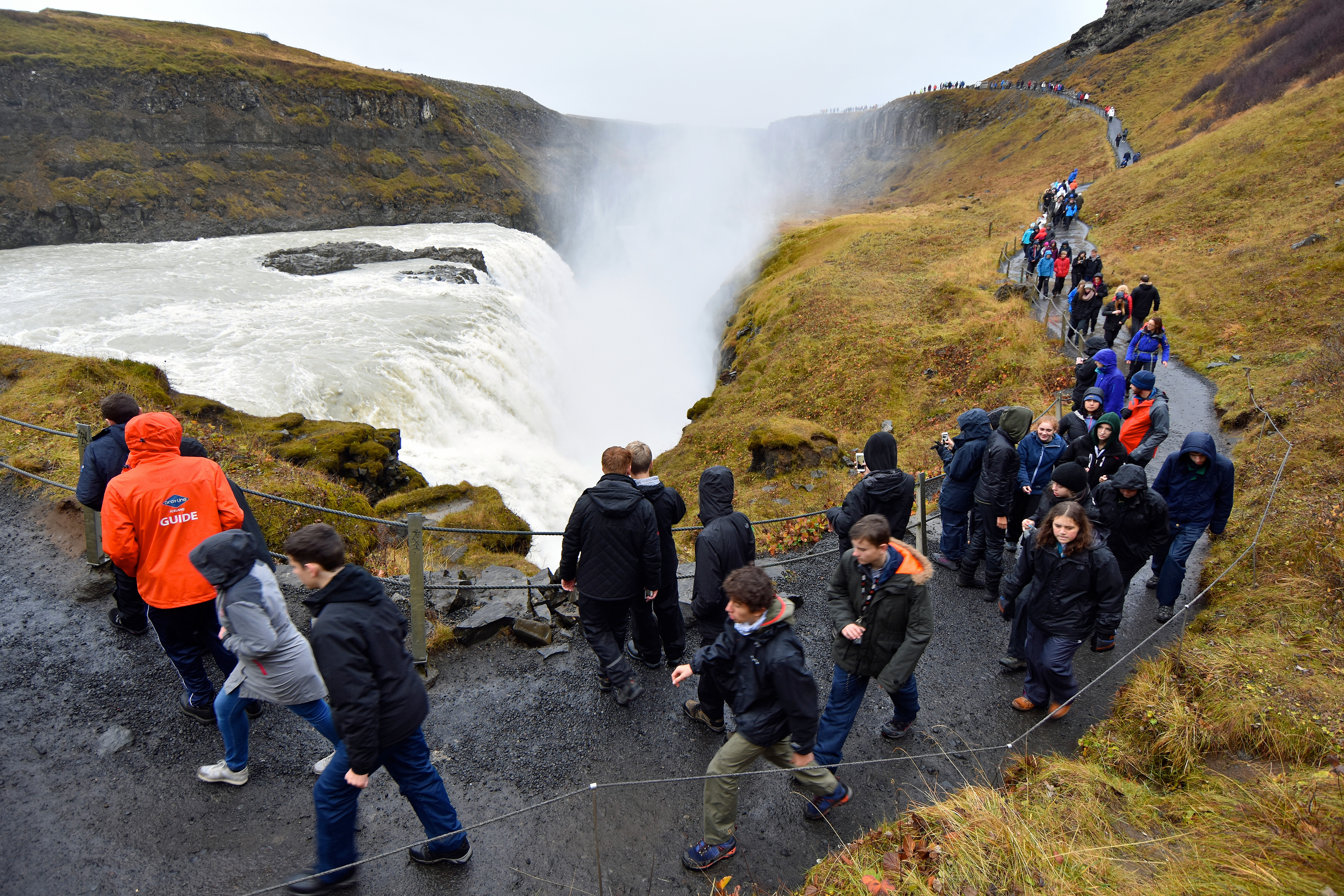 The land of volcanoes, hot springs, lunar landscapes, amazing waterfalls and all surrounded by a spectacular ocean for whale watching. Iceland has it all.

As the tourist industry in Europe trembles with fear of terror, the Vikings on the windy island in the North Atlantic provide a safe haven. Adventure destinations like Iceland are among the fastest growing markets in the global travel industry.

“Tourism is good for the economy, but I fear we will repeat the same mistake we made the last time our economy overheated,” says Steinunn HrafnsdÃ³ttir, director of the Faculty of Social Work at the University of Iceland.

â€œWe build a lot, everyone talks about the quality of everything. I’m a little worried, â€she said.

Tourism has overtaken fishing as the most important industry. With annual growth of 35 to 40 percent since the financial banking collapse in 2008, tourism now accounts for a third of Iceland’s foreign exchange earnings. 2016 will be a new peak with 1.8 million visitors expected on the island, which has only 323,000 inhabitants.

In downtown Reykjavik, you hardly find people who speak Icelandic. Bars, restaurants, shops are all crowded with visitors from North America, Asia and Europe.

Although providing jobs, mass tourism is not at all good for Icelanders. Residential housing prices have increased 55% over the past five years. The houses that could have been put on sale for the inhabitants are rather rented out to tourists.

â€œRenting an apartment is crazy,â€ says Petra FrimannsdÃ³ttir (25). She explains that apartment owners prefer to rent them out to tourists through Airbnb because it is more financially advantageous for them than offering long-term rentals to students and other young Icelanders.

â€œNone of my friends can afford to buy an apartment without the financial support of their parents,â€ explains Petra FrimannsdÃ³ttir.

Gudmunda PalmadÃ³ttir agrees. The 27-year-old lives with her parents and has just started a dance school. â€œIt’s expensive to rent, but impossible to buy,â€ says Gudmunda.

As Airbnb turns apartment owners into hoteliers, thousands of new homes are under construction or in the pipeline. Reykjavik’s skyline is teeming with construction cranes. In the harbor next to the Harpa Concert Hall and Conference Center, a huge new hotel is under construction. It might be necessary. The prices of hotels even in late autumn in the Icelandic capital are indeed expensive, even compared to central London or Paris.

Another challenge for tourism in Iceland is the hard currency. KrÃ³na has so far strengthened by 15 percent this year. Visiting Iceland is not as cheap as it was a few years ago.

“Prices here are only seven percent lower than in Switzerland, considered by the International Monetary Fund to be the most expensive country in the world,” national broadcaster RÃœV said citing KonrÃ¡Ã° GÃ­slason, economist at Arion Bank.

In terms of price, Iceland is now more expensive than Norway.

SigrÃºn StefÃ¡nsdÃ³ttir, former director of the national broadcasting service RÃšV, sees tourism as a way to extend his professional career. SigrÃºn is now studying to become a guide at Akureyri University in northeast Iceland.

â€œInstead of retiring, I will work as a tour guide. We Icelanders love to work, even at an age when most Europeans are retiring, â€she smiles.

Qualified guides with local knowledge are required. Icelandic nature is not for everyone to just start hiking. Glaciers, hot springs and deep waterfalls surely offer unforgettable views, but they can also be dangerous. Accidents are increasing, especially in traffic. Almost half of road accidents involve foreign tourists. In rental cars, foreign tourists are inexperienced with gravel and ice roads, one-lane bridges, or horses and sheep crossing the road.

â€œOur roads, the infrastructure are not built for the number of tourists that we see now,â€ says SigrÃºn StefÃ¡nsdÃ³ttir.

She is also worried about the pressure on nature. Iceland’s rugged landscape with tiny vegetation is vulnerable for the hundreds of thousands of tourists walking around. â€œI think we need to protect nature and develop better infrastructure. Otherwise, we will destroy what is unique about Iceland, â€SigrÃºn said with a more worried facial expression.

In 2014, the Organization for Economic Co-operation and Development (OECD) said in a report that the continued growth of tourism in Iceland must be carefully managed to preserve natural assets.

â€œThe combination of renewable energies and spectacular natural tourist attractions offers Iceland opportunities to play a pioneering role in the global transition to green growth,â€ the report reads and continues: â€œYet these assets must be well managed and conflicts fully resolved between these competing land uses.

The OECD recommends that Iceland develop a sustainable tourism plan with mechanisms to ensure that tourists contribute to financing nature conservation.

Most of Iceland is still unspoiled and wild. But this is not the case with the so-called Golden Circle, the most popular tourist route possible to cover in a day from Reykjavik. It includes highlights like the famous Geysir geothermal area, Thingvellir National Park, Kerid volcanic crater, and Gullfoss waterfalls.

Even now, in late fall, the tourist spots are teeming with tourists. In the summer season, when tens of thousands of cruise ship passengers arrive in addition to the influx of planes, the crowds are so large that it begins to worry Icelandic tour operators themselves.

â€œIf too many people come, the uniqueness that attracts them might disappear and we risk losing the market. It’s a balance, â€says SigrÃºn StefÃ¡nsdÃ³ttir.

In the waves of tourists arriving in Iceland, Americans are the largest demographic group, but Europeans and Asians are also numerous. For Americans, Iceland feels safe after a year of terror and fear in mainland Europe. Flights are also cheaper, with Icelandair and the low-cost carrier WOW Air providing connections to major European and North American airports.

When the EyjafjallajÃ¶kull volcanic eruption spread ash clouds across Europe in 2010, experts predicted a collapse in travel to Iceland. Today, the tourism industry in Iceland can conclude that the massive attention the eruption received was the best public relations campaign ever.

Game of Thrones, the TV series where Iceland’s spectacular and eye-catching scenery was filmed, was also a promotion few commercial PR agencies could have created.

The Icelandic national football team also did not take a bad step in promoting the country by humiliating England by eliminating them from the Euro 2016 football tournament. Iceland has fewer inhabitants than the Most of the smaller metropolitan districts of London.

Speaking at the Arctic Circle in October, northern expedition cruise pioneer Sven-Olof Lindblad said everything should be prepared, mass tourism is coming to the Arctic like lemmings.

â€œPeople underestimate the problems that need to be overcome,â€ Lindblad told the Barents Observer.

At Akureyri port in northern Iceland, 48 cruise ships made 104 visits with a total of 128,000 passengers disembarking this season, according to statistics from local port authorities.

58 cruise ships have already registered for calls in Akureyri for 2017. The ships will make 146 visits and carry more than 172,000 passengers.

Akureyri is just one of the many Icelandic ports where cruise ships call.

The tourism boom seen in Iceland today may occur in other places in the Arctic tomorrow. Winter tourism in northern Scandinavia peaks at the hotel des neiges in Norway and ski resorts in Finland.

In Svalbard in the High Arctic, the number of Russian tourists has quintupled in the past two years.

Click on the slideshow below for a virtual tour of Iceland’s attractions.