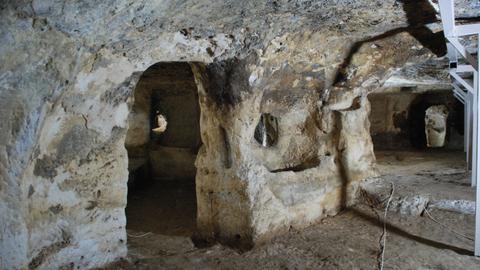 Many artifacts from the second and third centuries CE have been discovered in an underground city in the Midyat district of Mardin in Türkiye.

Midyat, which looks like an open-air museum with its history and culture, offers a magical atmosphere to visitors with its thousand-year-old stone houses, inns, mosques, churches and monasteries.

Excavation teams have found that a cave, discovered during work carried out in the historic streets and houses of the district two years ago, was not the only one, and that there were corridors inside the cave which served as passages to different places.

Upon the recent discovery, excavation work has begun in the area to reveal the underground city.

The underground city, which is called “Matiate”, houses many places of worship, silos, water wells as well as passages and corridors.

A massive ancient underground city has been discovered in the city of Midyat in Turkey’s Mardin province, which experts say could potentially be the largest in the world pic.twitter.com/0v5uDd5vv9

Midyat Mayor Veysi Sahin told Anadolu Agency that the excavation works, which have started to reveal the underground city, are ongoing.

Sahin said the underground city, where ancient and medieval structures are located, will increase the tourist significance of Midyat – the shining star of the region.

He pointed out that the authorities expect the number of tourists to increase from two million a year to four million after the completion of the work of discovering the underground city.

Sahin said officials plan to partially open the underground city for tourism when the excavation works are completed, adding that the area will be an important tourist destination for local and international tourists.