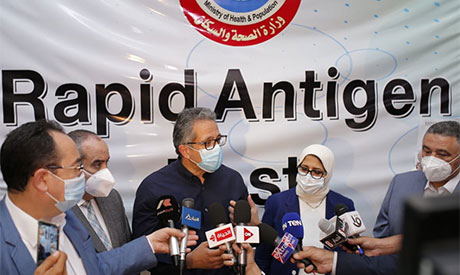 Egypt has fully vaccinated all staff working in key industries in the Red Sea and southern Sinai governorates, two of the country’s tourism hot spots, as hotels and resorts prepare for the return. safe for vacationers this summer.

Staff working in establishments such as hotels, resorts, cafes, restaurants, bazaars and tourist transport in the Red Sea and South Sinai governorates have received the COVID-19 vaccine. The announcement was made by government officials – including Egyptian Minister of Tourism and Antiquities Khaled El-Enany, Minister of Health and Population Hala Zayed, Minister of Civil Aviation Mohamed Manar and Governor of Red Sea Amr Hanafi – at a press conference held today during their visit to the maritime city of Hurghada to inspect the implementation of safety and health measures in the airport, hotels and its temporary medical units specially installed to improve the vaccination process for employees in the tourism sector.

“Vaccinating our staff is just one step we are taking to ensure that tourists can return to the gems of Egypt safely, quickly and with confidence,” said Egypt’s Minister of Tourism, the Dr Khaled El-Enany.

â€œThe cases of COVID-19 in the Red Sea and Sinai regions are negligible. Everyone involved in the Egyptian tourism industry has worked incredibly hard to get to this point and be able to provide a safe travel experience. Almost a year after the resumption of tourism in Egypt, we are pleased to note that the number of tourists is steadily increasing and has almost doubled since January and February 2021. The number of tourists arriving in Egypt in January was 300,000 and increased to 525,000 tourists in April. Now we open our doors and extend a warm invitation to people all over the world who are fed up with staying home and desperate to travel for their summer vacation. “

â€œEgypt has started vaccinating tourism staff in other key destinations including Cairo, Giza, Luxor and Aswan. The vaccination campaign is also open to foreign residents and tourists, upon their request. The next phase will be another important step in the recovery of the tourism sector, â€added Dr El-Enany.

As part of the measures taken by the Egyptian government to eliminate cases of COVID-19 in the Red Sea and southern Sinai governorates, shares of the vaccine have been allocated to medical centers, in addition to the installation of temporary medical units in some hotels and the use of mobile medical clinics, including medical teams, to immunize employees in the tourism sector and provide medical awareness services to citizens and tourists.

Since the COVID-19 epidemic, Egypt has adopted a wide range of health and safety measures to curb the spread of the virus in accordance with the recommendations of the World Health Organization (WHO). These include social distancing, compulsory masks in certain public places, compulsory testing for visitors, rigorous disinfection and sanitation campaigns, as well as the introduction of the hygiene safety certificate as prerequisite for tourist establishments and operators.

As a result, the country’s popular destinations on the Red Sea, such as Sharm el-Sheikh, Hurghada, and Marsa Alam, have consistently reported one of the lowest infection rates in the world. In recognition of Egypt’s efforts, the World Travel and Tourism Council (WTTC) has granted the country its Safe Travel stamp.

Travelers to Egypt must carry a negative COVID-19 PCR test certificate from their country issued up to 72 hours before the time of departure (96 hours for travelers arriving from Japan, China, Thailand, United States, Canada, South America, as well as London Heathrow, Paris and Frankfurt airports). Travelers arriving at Sharm el-Sheikh, Taba, Hurghada, Marsa Alam, and Luxor airports can take a PCR test upon arrival for $ 30.

Egyptian Minister of Tourism and Antiquities Khaled El-Enany checks tourists at a hotel in the city of Hurghada, Egypt, on Thursday, June 3, 2021.