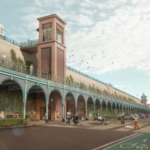 Final plans for the restoration of the first part of the Madeira Terraces are due to be unveiled on Friday – with work due to start next summer.

A planning application, which will include detailed plans and images, is due on Friday, with a new lift up the Royal Crescent Steps the biggest feature.

Meanwhile, contractors will begin clearing weeds and debris behind the fence and on the decking and walkway along the terraces in preparation to begin work on the first 41 terraces between Royal Crescent and Concorde 2.

The Royal Crescent Steps will be closed during the works, which include their repair, but the council says alternative access routes will be provided. More details will be released as part of the planning application.

Councilor Tom Druitt, Chairman of the Eastern Seafront Project Board, said: ‘The Madeira Terrace restoration project is the biggest project the council has undertaken in a long time. It’s a huge task, but we’re making progress and it’s fantastic to have the first phase underway now.

“The renovation of 41 arches in the first phase will breathe new life into the eastern waterfront, attract more visitors and benefit the whole city, especially residents to the east of the pier.

“We know how important Madeira Terrace is to residents and visitors alike, it has such a rich history and we are determined to bring it back to life and see it once again sit proudly on our beachfront.”

The plans were developed in consultation with an advisory committee of local representatives from different sectors, including tourism, community and events.

Its President, Bill Puddicombe, said: “Madeira Terrace is such an important part of our waterfront and our urban heritage. Many of us have waited so long to see progress.

“On-site work is what we want to see and with the planning process underway, we are one step closer to that ‘on-site kick-off’ moment that we all yearn for.”

The planning request must be decided by the councilors during the planning committee in November.

The Grade 2 listed Madeira Shelter Hall lift (within Concorde 2) will be restored and brought up to modern standards.

A brand new lift will also be installed on the steps of the Royal Crescent, providing access to Madeira Drive during the day and night and improving disabled access to the waterfront.

Alongside the restoration of the current Grade 2 listed east facing staircase, a brand new staircase will also be created to the west of the Madeira Shelter Hall lift.

The project aims to:

The upgrades will include the installation of new seating and lighting and pop-up space on deck and at ground level to accommodate events such as food festivals or music events.

Brighton and Hove City Council said a key part of the restoration is bringing back the terrace’s much-loved function as a ‘linear stadium’ for viewing events on Madeira Drive and improving pedestrian access to Marine Parade at the waterfront.

It also aims to introduce the concept of Madeira Terrace as part of a linear park for the eastern seafront area, linked to the Black Rock rejuvenation works which have prioritized planting and access. physics at the eastern waterfront.

Circular economy principles will be used throughout the project to reduce waste and reuse existing materials as much as possible. Cast iron contains a considerable amount of embodied carbon and therefore retaining as much as possible is the most positive way to support the planet’s climate emergency.

The design team hopes that once dismantled, a significant amount of cast iron can be repaired to minimize the amount of new cast iron parts needed. New structural beams will be recast and replaced only if they cannot be repaired.

Future phases of the restoration will be delivered as funding becomes available.

Design work begins on the center of Route 66