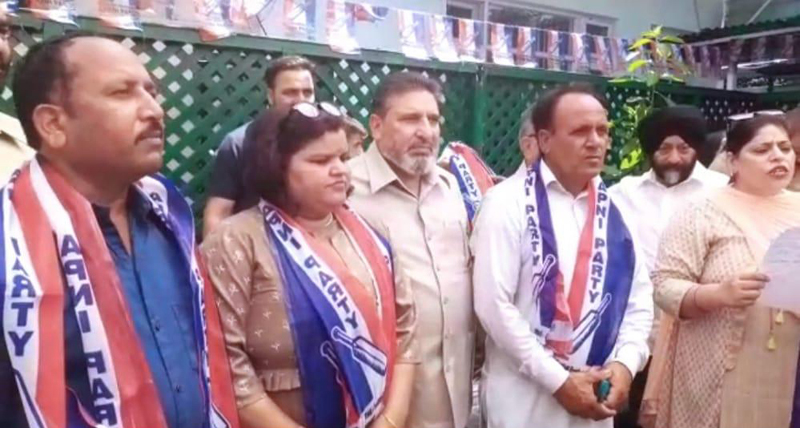 JAMMU, July 19: Chairman of Apni Party, Altaf Bukhari, today urged the government to speed up restoration works of historic sites, especially Dogra Palace, Mubarak Mandi, and promote tourism in a bid to protect the interests of the business community and the tourism sector in Jammu.
He was speaking at a membership program organized by the leader of the women’s wing, Pavneet Kour, in which a large number of RS Pura women among one Sarpanch Ashok Kumar and two Panchs joined the Party.
By welcoming them into the fold of the Party, Bukhari hoped that the Party would be strengthened at the grassroots level in Jammu and asked the party leaders and activists to work among the people for the redress of their problems.
“The Apni party supports the empowerment of women politically, socially, economically and educationally. We have provided a platform for women leaders to work for the welfare of women,” Bukhari added.
He said the AP supports 33% political reservation in the legislature and parliament for women.
“If we come to power, we will give Rs 1 lakhs as marriage aid to poor and needy girls, increase widow’s pension/old age pension up to Rs 5,000 and provide 4 cylinders of cooking gas in one year under Ujjwala program,” Boukhari said.
Referring to the problems faced by the people of Jammu in the absence of an elected government, he said Jammu had become a victim of divisive campaigns launched by mainstream political parties, especially the BJP, which ultimately affected the development, business and tourism sector.
“Development has never remained on the agenda of traditional political parties,” he said and appealed to the people to lend their support to the Apni party for equitable development of Jammu and Kashmir regions .
He said the historic Dogra Palace Mubarak Mandi is still being renovated at a very slow pace of work for many years and the artificial lake project is yet to see the light of day in Jammu.
“If the Apni party comes to power, they will investigate why the renovation works of the Mubarak Mandi complex have been delayed for years and why tourism in Jammu has not been promoted,” he said. .
Senior leaders Ghulam Hassan Mir, Dilawar Mir, Manjit Singh, Faqir Nath, Arun Chibber, Nirmal Kotwal, Dr. Rohit Gupta and others were also present on the occasion.